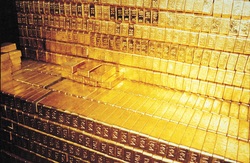 "Before most of you were born, the bankers operated a scam intended to rob all members of the 'general public'. They removed all forms of money and replaced it with worthless notes which read "I promise to pay the bearer..." with another worthless bank note (FIAT Currency).

They then managed to do away with the Government and replace is with groups of commercial companies which they own. They cunningly named these companies so that they 'look' like Government. They took over the printing of the worthless bank notes with their private company called "The Bank of England" which is meant to sound like a Government Organisation, although it MOST DEFINITELY is NOT.

The next step, in their 'lets be honest here' quite clever plan, was to get their company which sounds like the Government, to ask their other company "The Bank of England" to print them lots of (worthless) money and to charge interest on that money, over and above the face 'value' of the Currency. This excess interest amount is called "The National Debt" in order to fool ordinary people into believing that their Country some how owes somebody large amounts of money.

So FIRSTLY, there is really NOTHING owed at all. SECONDLY, there IS no money. THIRDLY, the Country does not owe anything, and in the unlikely event that there were a genuine debt, then it has nothing to do with ordinary people any way as it is just a notional debt incurred by one commercial company to another commercial company! (ALL owned by the same people)

This supposed debt has been boosted over the years to a ridiculous level which could NEVER, EVER be paid off, and you will no doubt be glad to learn that all income tax is now paid to the owners of these commercial companies. Isn't it great to be paying vast sums of money to a commercial company which has never done ANYTHING for you and which holds you in utter contempt because you havent discovered their SCAM and continue to pay lots of ridiculous taxes, fee's and charges! None of which, by the way, you have to pay at all! All combined, these charges amount to nearly 80% of a persons earned income!

Do you enjoy living on one fifth of what you COULD have HAD!?

Anyway, to strengthen their SCAM, they have invented a Language of Lies called 'Legalese' or 'Legal Terminology' where they have 'GET THIS!'...changed the meanings of ordinary English words in order to Abuse & Rob ordinary members of the public!

They have set up yet another company called "The Law Society" to train up unscrupulous people in their methods of madness, lies and deception. Their commercial company which pretends to be the Government, keeps inventing new 'Statutes' which they 'pretend' are Laws (and are MOST DEFINITELY NOT) and they keep this game up by telling everybody that " THEY MUST OBEY THESE LAWS" and they have even subverted Police Men & Police Women into 'Police Officers' and convinced them that they have to enforce these Statutes.

The primary aim of these Statutes is to take banknotes, goods and property from members of the public who have not yet discovered that it is a scam being run 'secretly' against them. Many Police Officers are probably themselves ignorent of the fact that Statutes are purely optional and NO 'Human' is actually bound by them.

SO what you decide to do is entirely up to yourself. You can continue to give away most of your income to fund people who want to take, harm & steal from you OR you can decide to step 'outside' this corrupt system we are almost forced to be living in, and stop paying these people.
ALL humans are born equal, so there is nobody who has the RIGHT to order you around, unless you agree to give them that right (By Consent) Acts & Statutes can be given the 'FORCE' of Law, only with Consent. SO DO NOT CONSENT.
The choice is yours to make BUT Knowledge is Power - UK has already made that choice, and that choice is FREEDOM from a Government that cant GOVERN.